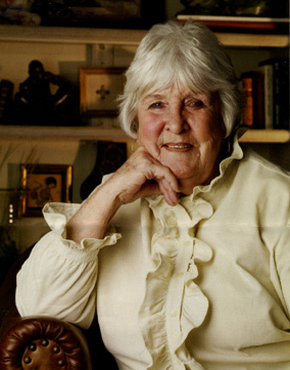 Known for her stoic portrayals of women, Shirley Thomson-Smith creates sculpted figures that seem a combination of Indian, Mexican and African, silent and thoughtful, suggesting the strength and endurance of humanity.

She was deeply influenced by a move she and her husband made in 1953 from Oklahoma to Durango, Colorado. Traveling into the Southwest, she came into contact with Native Americans, especially Navajo women, whom she found fascinating. But it was about five years later, after a return move to Oklahoma, that she started to include them as subject matter.

In 1980, she became a full-time sculptor, and in 1985 was accepted as a member of the National Academy of Western Art, only the fourth woman to have been admitted. She works with water-based clay, without armatures and without a model or preliminary sketch and photographs continuously while working. She has molds made locally and then ships the clay piece in the mold to the foundry. The final form evolves from her intuitive response to her material.