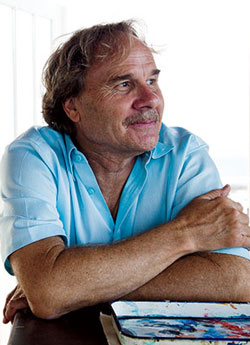 A graduate of the Ringling School of Art in Sarasota, Florida, Young began working in watercolor in 1976, and took first prize at the American Artists national art competition in watercolors in 1985. Also, in the early 1980's, Young made his first trip to the Bahamas where he discovered the crisp, bright light that has become the hallmark of his paintings today. Currently, the artist divides his time between studios in Florida and the Bahamas.

Each masterwork by Stephen Scott Young is preceded by numerous drawings, sketches, studies, and preparatory paintings. The spirit of these works in progress often exceeds the finished subject and, when available, are eagerly sought by collectors.