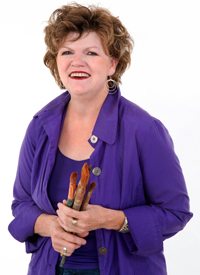 Born in 1952 and reared on a farm in Tennessee, Linda St.Clair could hardly wait to reach adulthood and leave her country life behind. At age eighteen she moved to Dallas, Texas and began a career in marketing. Twenty years later, she began to devote her full attention to painting still lifes and landscapes, but her true passion was capturing the personality and essence of barnyard animals.

She won two Grumbacher Gold Medals and membership in the Society of Animal Artists in New York. She was also a member of the Southwestern Watercolor Society and the Oil Painters of America, and exhibited nationally at such shows as the Buffalo Bill Art Show in Cody, Wyoming, the Audubon Artists Annual Exhibition in New York, and the Salmagundi Club in New York.

Linda St. Clair was best known for her portrayal of vibrant roosters, cows, and other barnyard animals. The subject matter in her work, however, cannot be seen as merely representational images of domestic animals, as she gave each of her animals an attitude and personality that was reinforced by her clever titles. Themes of pride, as well as those of love and motherhood, can be found in her works.

Linda credited some of the appeal of her paintings to the need to return to a more simple time and reconnect with the earth. St. Clair believed that we have much to learn from animals, and her love and respect for these animals was made clear through her work.

Sadly, our dear, talented friend passed away in the fall of 2018.