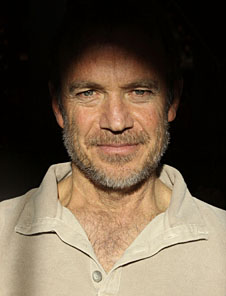 Although Kim English lives with his wife Andi in an idyllic Colorado mountain setting, it is the lure of travel and the inspiration of everyday cityscapes, sensuous interior scenes and intimate figure studies that are characteristic of his paintings. With regular visits to Europe (at least once a year) and Mexico (twice each year), English also finds time for visits to other locations.

An early riser at home and away, Kim English greets the light of each new day with the anticipation and enthusiasm of an explorer.

Inspired by the contemporary painter Richard Schmid, English works in the alla prima method of painting, trying to complete each painting in one sitting. On the road, he completes quick pencil sketches and small color studies that can be done in five to ten minutes, and while he might also gather reference materials with a camera for use back in the studio, he insists upon drawing and painting on site to grasp the dimensionality of each subject he selects to explore.

Born into a famiy of musicians, Kim English is an accomplished pianist and composer, and he has described the similarity of energy in music and painting: rhythm, movement, balance as integral to the simplicity he strives to achieve in each of his canvases.

English's formal art training was completed at Denver's Rocky Mountain School of Art in 1979 where he later taught until the mid 1980s. Since that time he has won national acclaim for his work including the Allied Artists of America's Gold Medal of Honor, the William Meyerowicz Memorial Award for an American Scene and the Salmagundi Club's Joseph Hartly Memorial Award for an oil painting.